Holocaust Trauma offers a comprehensive overview of the long-term psychological effects of Holocaust trauma. It covers not only the direct effects on the actual survivors and the transmission effects upon the offspring, but also the collective effects upon other affected populations, including the Israeli Jewish and the societies in Germany and Austria. It also suggests various possible intervention approaches to deal with such long-term effects of major trauma upon individuals, groups and societies that can be generalized to other similar traumatic events. The material presented is based on the clinical experience gathered from hundreds of clients of the National Israeli Center for Psychosocial Support of Holocaust Survivors and the Second Generation (AMCHA), an Israeli treatment center for this population, and from facilitating groups of Austrian/German participants in Yad Vashem and Europe; as well as upon an extensive review of the vast literature in the field.
More information can be found here.

Michael Grodin calls new Holocaust book 'monumental' in JAMA review: "...the most important book published on this topic in a decade."

Judy Siegel-Itzkovich: "A new book examines how Holocaust trauma can haunt even the grandchildren of survivors."

Time does not heal all wounds: decades after a disaster, entire communities may still experience the long-term effects of trauma.

Sociodrama and Collective Trauma examines the psychological and social damage of trauma to society as a whole. Kellermann argues that collective trauma has been insufficiently considered; his timely book suggests practical ways of facilitating the rehabilitation of survivors of collective trauma through, for example, sociodrama and related group work. The author develops methods for understanding the past and preparing for the future and provides a wealth of case studies based on 30 years' experience of treating survivors of war trauma and other forms of disaster. Combining a systematic theoretical approach with a practical methodology, this insightful book is invaluable for drama therapists, group therapists, mental health professionals and counsellors.

"It is a rich and committed book, conveying the deeply felt responsibility of the author to confront prejudices, inhumanity and ideologies promoting violations of human rights and human dignity." Peter Berliner, Counselling and Psychotherapy Research, University of Copenhagen.

"The style is engaging and likely to encourage the reader to want to know more..." Ruth Barnett, Therapy Today.

"A fascinating and inspiring book, motivated by a powerful vision of sociodrama..." David Manier, PsycCritiques.

"I recommend this book to all those who want to make a difference in how our communities function." Carl Dutton, The British Journal of Psychodrama and Sociodrama. Winter/Spring, 2008.

Psychodrama with Trauma Survivors: Acting Out Your Pain. 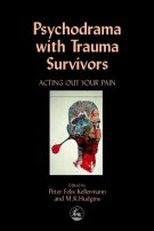 In a world where natural, social and political disasters are a daily reality, the therapist is increasingly called upon to find rapid and effective methods of treating the survivors of trauma, including sexual abuse, torture, war-related trauma, addiction, depression and bereavement. The contributors to this book provide persuasive evidence of how psychodrama can safely be used to create paths of change for even the most severe traumatization and they also discuss the possible transmission of trauma patterns across generations. Research following World War II, neurobiological studies and other recent research into PTSD has shown that many trauma symptoms are unconscious, non-verbal, right-brained experiences which cannot be accessed through talk therapy. Psychodrama creates a place to act out unprocessed trauma within the containment of therapy, in order to stop the obsessive repetition of the past. Psychodrama with Trauma Survivors documents the impact of trauma and explores the development of treatment, providing integrated models of experiential treatment for clinicians to use. It is an invaluable resource for those interested in psychodrama and those working with trauma survivors.

"This collaboration details the work of international experts who practise psychodrama in many different countries." Zerka T. Moreno, 2000.

"This well-written book deals sensitively and wisely with much of the depth and breadth of human trauma." Psychotherapy in Australia.

"I was very impressed with this book." Diane J. Adderley, Drama Therapy, Autumn, 2001.

1992. Jessica Kingsley Publishers. London.
This book provides a comprehensive overview of the theory and practice of psychodrama, presenting a systematic analysis of its essential ingredients. The core issues involved are specified and the interpersonal, emotional, imaginary, behavioural and cognitive elements are discussed. By proposing more uniform definitions for these central psychodramatic concepts, some of the confusion which surrounds the theory of psychodramatic technique is reduced. The professional roles assumed by psychodramatists are examined and the skills required in each role are established. In addition, the therapeutic value of catharsis and emotional abreaction is discussed. Also explored is the use of the concept of acting out, both in psychdrama and psychoanalysis, and how the use of action-insight methods can provoke profound learning experiences. The book concludes with discussions of the problem of resistance, and the importance of the concept and technique of closure in each psychodrama. A processing checklist is added at the end of the book as a systematic aid in evaluating the professional skills of the psychodramatist. The chapters are both pragmatic and solidly grounded in theory, thereby providing students with an effective, in-depth alternative to the traditional verbal therapies. The book is intended for students and practitioners of psychodrama, and professionals seeking to extend their knowledge of creative arts therapies.